My trades are not always good, far from it. I am still a serious student when it comes to the market. But sometimes I get success, not only because I made money on the trades but because I followed my plan and it paid off. Sometimes, I get very happy getting stopped out of my trade and seeing the price drop further. Even if I lost money, I have the satisfaction of knowing I could have lost a lot more and I am happy my system worked.

In this case, it was actually a good trade though. This was my second successful attempt trading a dip trip. The daily chart had showed a nice uptrend from mid-January to early February. I picked CEF on my list half-way through the drop. I waited for a decent entry signal which came in the form of a gap open on 2/6 with a MACD crossover and several other indicators. This was all happing right around the 50-60% pullback mark on the Fibonacci grid. My order was ready overnight on 2/5 so I was stopped in pretty early on, giving me a good entry for once. This allowed me ride the down movement on 2/6 not too worried about the outcome. 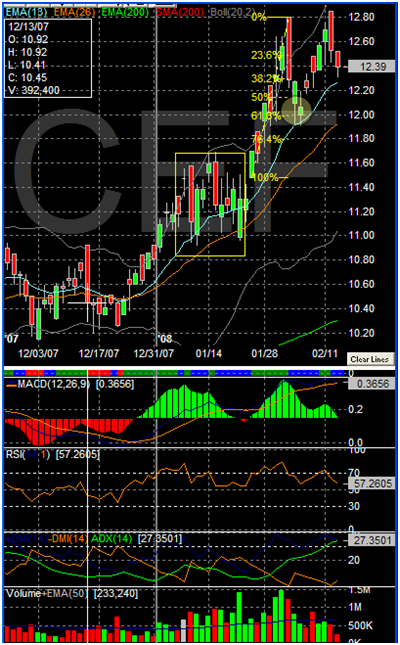 After getting in, I rode the uptrend as much as I could. My stop was following closely with the price-action and I was eventually stopped out. At first, I thought it was a premature exit and the high open the next day got me worried. But it turned out to be an an exhaustion move and the prices declined quickly after. So I missed some of the price at the entry and some at the exit but overall, I covered quite a bit of movement on the trend and I am very happy with this trade overwall: good entry, good exit and the system worked as expected. 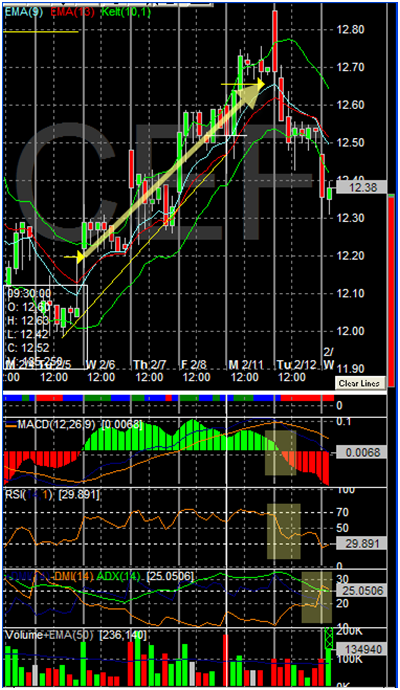 These encouraging charts keep me coming back for more.