I know my posting has been inconsistent but such is life. Some weeks trading and blogging take a lot of my focus and others, well not as much. This time I was brewing something new I meant to start some time ago. A new series of posts categorized ‘Black Belt Trading’. 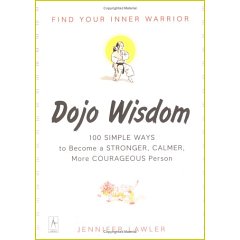 For those who do not know, I am a martial artist. I recently read a great little book by Jennifer Lawler titled “Dojo Wisdom”. In it, she introduces 100 simple ways to make you a better and stronger person. The book has really nothing to do with martial arts but she uses teachings from the dojo and extrapolate important life lessons. If you have been reading here for a bit, you may have seen the Key Principles post from last summer where I mentioned I found fascinating that lessons learned to make you an expert in one area are usually easy to transpose and translate to a totally unrelated topic. In the same vein, I plan on using Jennifer’s lessons to extrapolate lessons for better trading which I hope will help me, first as well as the readers. For my first tip, I will use Dojo Wisdom #2: A punch is just a punch. She writes:

“Bruce Lee once said (to paraphrase) that before he began training in martial arts, a punch appeared to just a punch – that is, a tool for fending off an attacker. But when he began to study martial arts, the punch became much more – it became symbolic of power, of control, of possibility and of achievement. Yet, when he finally understood martial arts, he realized that a punch was just a punch.”

Learning to trade often works the same way. When you start, the charts are just prices at which trades are made. Than you dig and learn various indicators and charts have moving averages, MACD lines or histograms, stochastics, TSV or RSI plots. Charts can be bars or candles and various candles in various patterns have different meanings. Prices also form patterns like double-tops, double-bottoms or head and shoulders. When you are done with all that and have more experience, charts end-up being pretty much what they where: prices in time at which trades are made.